Bulgarians and visitors to their capital Sofia were offered a dazzling show of ancient and modern wealth earlier this year. The country’s national gallery, housed in an elegant former royal palace, displayed 62 glittering treasures dating back to 1,000BC in an exhibition called “The Golden Fleece. The Quest of the Argonauts”.

It included 16 pieces that were on show for the first time, having resided in the well-guarded storehouses of the Thrace Foundation, a creation of multi-millionaire businessman Vassil Bojkov. The exhibition brought some cultural sparkle to Bulgaria’s six-month presidency of the EU, and may also have added a little lustre to Bojkov’s shadowy reputation.

Established in 2004, the Thrace Foundation says it funds research and improves access to museums and protection of cultural heritage while caring for its founder’s collection of more than 3,000 precious artefacts.

Bojkov, whose name is sometimes spelled Vasil Bozhkov, is thought to be Bulgaria’s richest man, with an empire spanning construction to gambling operations that he built during his nation’s chaotic and sometimes bloody switch from communism to capitalism in the 1990s. With the Thrace Foundation perhaps the tycoon nicknamed “The Skull” is trying to give something back to the poorest and most unequal country in the EU.

Some 11 years after Bulgaria joined the EU – raising hopes for a swift rise in prosperity, a more robust democracy and broader social justice – data from Eurostat in Brussels now make for bleak reading.

The upshot is that more than 40 per cent of Bulgarians are now at risk of poverty and social exclusion – twice the proportion of Germans who find themselves in the same predicament. 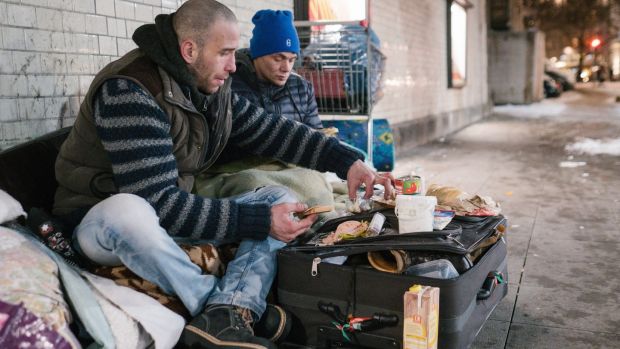 “There are three Bulgarian realities,” says Daniel Kaddik, the Sofia-based director of the Friedrich Naumann Foundation in southeast Europe.

“People with an average salary don’t live a good life here, with prices for food, energy and other things that are comparable with elsewhere in Europe.”

“Then there is a relatively small middle class who have their own bubble, and work in start-ups or international companies, and live in some areas of Sofia that are comparable with parts of Berlin, for example.”

“Then there’s the upper class, which is detached from everything else. They have very fancy cars and private members’ clubs, and there is very often an overlap with shady business.”

“I lived in Berlin and I never saw a Maybach,” he adds. “In Sofia I’ve already seen three.”

The economy is growing at around 3.5 per cent, but the World Bank says it needs to expand “by at least 4 per cent per year over the next 25 years for Bulgaria to catch up with average EU income levels and thus boost shared prosperity”.

Bulgaria leads the EU when it comes to one unpalatable indicator – the prevalence of corruption, and graft is draining the economy, scaring away foreign investors and serving to keep people poor.

The country was the EU’s most corrupt nation in the latest Transparency International index, ranking in 71st place alongside South Africa and Vanuatu.

Just as alarmingly, an EU survey found last year that only one-quarter of Bulgarians would trust the police to deal with a corruption complaint, and police and customs officers are seen as the public servants most likely to take bribes.

The European Parliament estimates that corruption costs Bulgaria about 15 per cent of its gross domestic product (GDP) each year, and graft reaches into every facet of life – from rigged tenders, opaque contracts and kickbacks in multimillion-euro deals to the need for ordinary citizens to pay bribes to smooth their path through the country’s health and education systems and its Byzantine bureaucracy.

All these backhanders, big and small, feed a grey economy in Bulgaria that the International Monetary Fund (IMF) found last year was equivalent to 29.6 per cent of its GDP, the largest such share in the EU.

The result is a debilitating cycle of tax evasion and capital flight, depleted revenues for the government, sub-standard services for the public, and a grinding sense of injustice, grievance and mistrust towards officials and state institutions.

An EU survey last year found that when it came to achieving success in life, more than twice as many Bulgarians believe that “knowing the right people” is a bigger factor than having a good education.

This feeling that the game is rigged in favour of those with connections, and that poverty is permanent, is writ large in Bulgarian demographics – young people are leaving, couples are having fewer children and the population is falling fast.

The UN says Bulgaria is actually the world’s fastest shrinking nation, with its current population of about 7 million people expected to dwindle to 5.4 million by 2050 and 3.9 million by the end of the century.

Bulgaria has already lost almost 2 million people from a peak of nearly 9 million in 1989, revealing the massive and long-term impact of the transition from communism to capitalism on eastern Europe – where eight other countries are also expected to suffer a population decline of more than 15 per cent by 2050.

The EU’s highest mortality rate, coupled with one of the bloc’s lowest birth rate and the emigration of tens of thousands of workers each year, leave Bulgaria with a headache over how to fund pensions and healthcare for an ageing population.

It is no surprise that tens of thousands of Bulgarians seek jobs abroad each year, with Germany, Britain and Spain their favoured destinations, creating a chronic shortage of staff in country’s health service, schools and other major sectors.

“There are now places where you don’t have doctor within radius of 50km. You have to bring own toilet paper to the hospital and these kinds of things. It’s a climate that lots of people just don’t want to live in anymore,” says Kaddik.

While young professionals are leaving home in search of higher wages, better working conditions and a less corrupt environment, many Bulgarians do not even wait until graduation to start looking abroad for opportunities.

About 17 per cent of Bulgarian students went to a foreign university last year, and some of the country’s top universities are now trying to fill hundreds of empty places for the new term.

A glimmer of good news for people returning from abroad is that they will probably find the family home waiting. About 84 per cent of Bulgarians own the place where they live, compared to just 53 per cent in Germany.

“People were given the apartments where they were living (when communism collapsed) and they are lucky to own their homes, otherwise they simply could not afford their housing,” says Kaddik.

“A lot of Bulgarians, especially the elderly, rely on food grown on a little family plot outside the city. The family bond is strong here, and among friends and relatives there is a lot of exchange of small services and helping each other out – but it’s out of necessity because of a lack of good services.”